Nothing good ever arrives in a brown window envelope. They are the snide cloaks around which underpaid tax statements, overdue bills and accusations of minor civil disobedience gain entry to your home. They are as unwelcome as receiving the Black Spot from a pirate. They are the unbleached bearers of bad news.

I received a brown envelope a couple of months ago. It contained pin-sharp spy-camera images of me in what the sender considered a compromising position. They were undeniably of me. I had been snapped stopping my car for a few seconds in a bus stop to pick up my daughter at her university town of Kingston-upon-Thames some 60 miles away from Newbury. The accompanying letter told me that this was a crime, albeit victimless, and that they had determined my punishment would be to pay RBK (Royal Borough of Kingston Parking Services) £110 for this unwitting transgression of their rules, which they would raise to £165 if I did not pay up in a timely manner, though they would kindly reduce it to £55 if I was obliging enough to make prompt payment without fuss. I looked again at the pictures and the 15-second long video-link they sent of me in their forbidden zone. I felt honey-trapped, blackmailed and extorted. 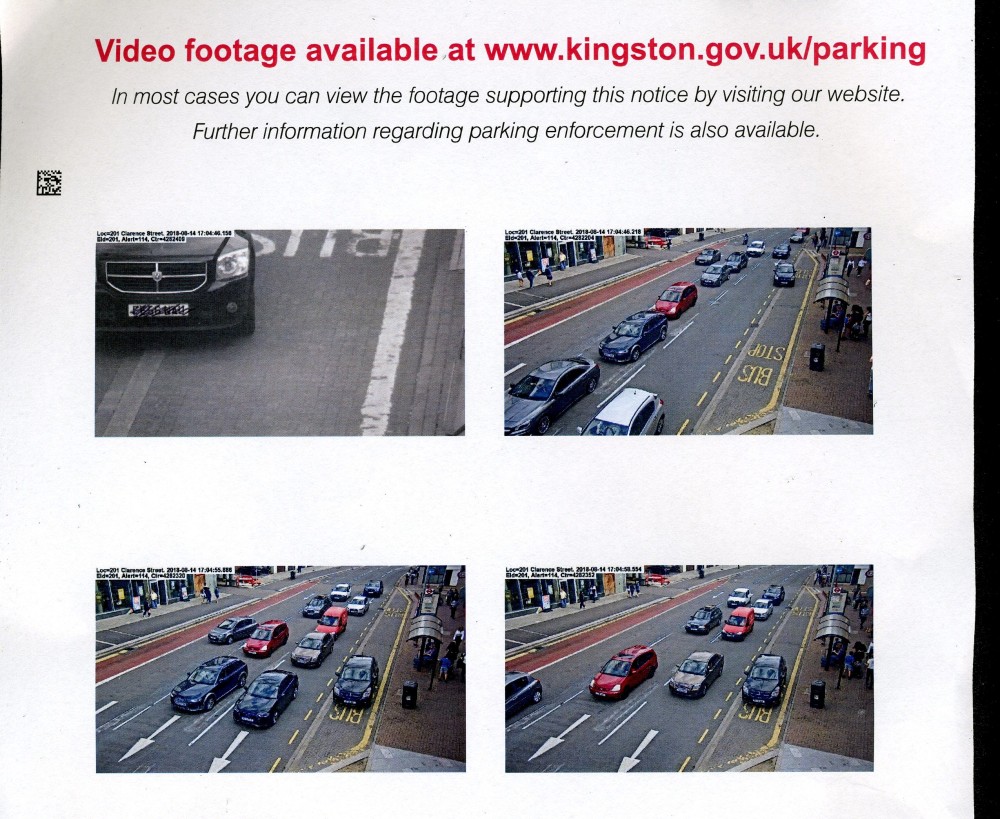 The very next post brought another worryingly brown envelope. I thought they’d sent me the same thing, but it was subtly different: this one contained the same template letter, but with a different Penalty Charge Reference Number, this time penalising me for the same offence at the same bus stop committed two weeks later in the same car, picking up the same daughter.

Reader, I think it fair to say I was not best pleased. Even if I had paid at their generously reduced rate, it would cost me equivalent of a days pay for a combined stoppage time approaching 30 seconds at an empty bus stop, attempting nothing more treacherous than to pick my daughter and take her to tea.

The next time I drove to Kingston, I picked her up elsewhere and we walked to see the site of my felonies. As I thought – one large bus stop, maybe 50 yards long with NO advance sign to advise non-bus drivers to avoid entry. But RBK had deemed it necessary to put up a warning sign, but sneakily made it a tiny one, about 10×8 inches in size, 25 yards into the bus stop, pointing perpendicularly at the road at a height where the roof of your right-hand drive car, unless it be a convertible, or have a glass roof, would completely block sight of it. Here is the picture RBK themselves provided in their evidence against me. Can you see the warning sign? No, of course you can’t – its on a pole the other side of the bus shelter you can just make out two thirds of the way along the bus stop.

I was outraged, and took my own snaps of the lack of signage to accompany the appeals I was going to send in, citing ungentlemanly conduct and constructive entrapment on their part in bagging me (twice) as an easy source of penal funds. Anticipating my gander was up at an enemy who held the power of law, if not the morality, I paid my 2 x £55 (ie £110) to stop them running their clock on me while minimising my financial outlay should I be unable to convince the Environment & Traffic Adjudicators, London Tribunals, Nottingham, of my innocence of RBK’s trickery.

A few days later, a white envelope -the wrapping of light and hope, arrived from the Adjudicators telling me I had been granted a personal hearing, at a location some 75 miles from my home, and 18 from the site of my so-called offences, in Clarence Street, Kingston-upon-Thames. I wrote back thanking them, explaining it was not cost effective – ie bloody expensive – for me to attend but that my non-appearance should in no way distil my sense of injustice. I told them how they should insist on RBK installing proper advance warning signage to prevent other drivers guilty of nothing more than good intentions albeit with some naivety.

The next day two more brown envelopes came from RBK Parking Services. They might as well come with one of those blue sachets of salt for me to rub into my wounds. In large font they told me that as I had not paid their ‘£110 per offence penalties’ within their stipulated time, the required fees had now been increased to 2 x £165 (£330). Having blooming well paid them 2 x £55 (£110), I copied these threats and my receipts straight to the Adjudicators thinking it could only strengthen my claim of their inhumanity and bolster my case. Not so, they wrote back (white envelope) to confirm that if my appeal found against me, RBK would indeed be entitled to claim the full 2 x £110, raising to 2 x £165 if not paid by their originally imposed deadline.

I was outraged yet deflated. I sensed my hearing would be a fait accompli declaring that RBK had complied with all minimum signage requirements and thus their full penalties would apply. Though I felt I was in the right, I was thinking maybe I should have swallowed my medicine like a child who cannot stand up to a tyrannical matron, and paid my 2 x £55 (£110), had a good moan and then got on with my day.

Yesterday another white envelope came. It was from the Adjudicators. At the hearing despite my absence, the adjudicator, a Mr D.P, (you know who you are, sir, and that I love you) ruled that by sending me those two hassle letters when a tribunal was in process, RBK had breached their own procedures, rendering both claims against me invalid, and he instructed them to refund my 2 x £55 (£110). Of course there was nothing about the inadequate signage, but then, to a point, who cares!

Well, I do actually, as RBK’s bus stop fining policy that I was feebly trying to stand up against remains unfair. I wonder just how many drivers, many of whom like me don’t particularly know the area, are snared in the same way and either pay their fines or don’t hit upon the technicality that bailed me.

I intend to send a copy of this to the Kingston-upon-Thames MP while I sit here waiting for my refund cheques to arrive in an envelope coloured to the RBK’s choosing. In fact, if they do not arrive over the next couple of days I may write to them demanding that if I do not receive repayment in 14 days, the amounts due will be doubled. What do you reckon?

SO PLEASE, WE CAN’T ALL BE AS LUCKY AS ME – DON’T PICK UP YOUR KIDS AT IN-TOWN BUS STOPS – YOU DON’T KNOW WHO MIGHT BE FILMING YOU

However random it might seem, everything in this world has a pattern

It’s all about the journey

The art of designing your life